While gearing up to manufacture the vaccine against COVID-19 developed by pharmaceutical company AstraZeneca and Oxford University, Brazil’s Oswaldo Cruz Foundation (Fiocruz) has worked on its own vaccine projects which may start human testing in 2021. One of the vaccines is expected to be available in 2022.

The two vaccines are being developed at the Institute of Immunobiological Technology (Bio-Manguinhos), Fiocruz’s laboratory, with pioneering technological platforms. Both are in their pre-clinical lab trials, and are likely to start a new animal testing stage known as challenge study, Bio-Manguinhos/Fiocruz vice-Director of Technological Development Sotiris Missailidis reported.

The vaccines have been approved in their immunogenicity and toxicity phase in animals, which means they were able to produce an immune response without harming the health of the guinea pigs. In the next stage, scientists will ascertain how vaccinated guinea pigs will respond to exposure to SARS-CoV-2. As it includes the virus in conditions to cause an infection, the test awaited the availability of a high biosecurity laboratory (NB3) and is slated to take place still this month.

“These two approaches we’re utilizing do not compete with the production lined we’ll use for AstraZeneca. So, potentially, we could offer both at the same time, which ensures national sovereignty,” Missailidis said, adding that Bio-Manguinhos will choose which of the two vaccine proposals is more promising to proceed to clinical trials next year.

Missailidis noted that advancing the research is key regardless of the success of tests with the AstraZeneca/Oxford, whose total supply in 2021 is expected to add up to 210 million doses, in a vaccination scheme which at first includes two doses per person. All these forecasts are still pending confirmation for security and efficiency following the outcome of phase 3 clinical tests and registration with Brazil’s sanitary regulator Anvisa.

“Having our own vaccine to cover the domestic market, with the same efficiency as those from major pharmaceutical companies, is crucial for Brazil’s public institutions, health care, and science,” the researcher said. Brazil could then export its own vaccine to help tackle the pandemic internationally, he went on to argue.

One of the vaccine proposals under development used the production of proteins S and N from SARS-CoV-2 that Bio-Manguinhos already carried out to produce diagnosis tests for COVID-19. Classified as a subunit vaccine, the technology used includes the injection of these proteins into the human body so that its defenses can recognize it and prepare for when coronavirus actually starts an invasion. Protein S is the one forming the spikes after which coronavirus was named, and protein N makes up the virus’s core.

The second proposal developed at Fiocruz is a synthetic vaccine, which makes use of protein S and N peptides produced in laboratory through chemical syntheses and attached to nanoparticles. These peptides were identified through a computer model and prompt both the production of antibodies and cellular immunity, where the system eliminates infected cells and prevents the development of symptoms.

In addition to vaccines fully developed at Bio-Manguinhos, there are two projects underway with partners from other research institutes: a synthetic vaccine with Oxford University and a recombinant protein vaccine with Fiocruz’s Health Technological Development Center (CDTS). 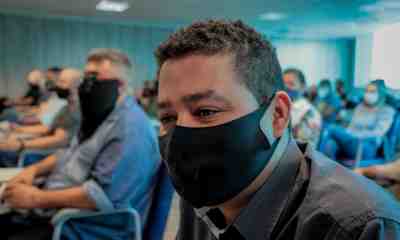